About Worker Motivation and Increased Production

I've recently met with Dudu, a COO of a large company, who told me mangers in his company ask – why should I compliment my employees, they're only doing their jobs.

What do you think? Is it important to compliment people? Employees?

Let's Look Ourselves in the Mirror

What did it feel like, the last time you were complimented? For a nice outfit, doing well in school or on a successfully completed project? How did you feel posting about your kid's or grandkid's high grades on Facebook, or WhatsApp, and got dozens of likes?

Haim, the CEO of a mid-sized company, told me recently that he's bothered by the fact his employees don’t appreciate him.

It's important to me to be liked, he answered with admirable honesty.

Indeed, who among us doesn’t want to be loved and appreciated by does around.

Haim, the CEO, declared his goal for working with me as 20% increase in production.

Does it seem to you an unachievable goal? To me it's an easy task.

Why am I so sure?

One of our first actions working together was measure and document daily production for each machine.

Production on the machine operated by Faiz fluctuated daily, going up or down more than 20%.

I asked Faiz the reason for this: look, said Faiz, it all depends on how tired I am. If I'm tired, I sit down for two minutes here and there, that’s the whole difference.

So predictable, yet I'm constantly amazed by employees' candor and accurate reading of the situation.

We can exchange the phrase "I'm tired" with "I don’t feel like it". Or in a word, motivation.

Let's go back to the beginning. After Haim said he wants to be liked, I remarked that he is not unique in that – we all feel that way, including his employees.

I reminded him of his goal in working with me, showed him the fluctuations in production over recent days, and told him of what Faiz has said.

I suggested Haim should go to Faiz, and if production is higher than the day before, compliment him, praise him, and ask him how he did it.

Haim came back and said production was higher by 10%, but he couldn’t give positive feedback. Simply couldn’t say the words.

I Can't Give My Employee Positive Feedback

Is Haim an outlier?

When did you last compliment a colleague? Or an employee in your organization?

Let me remind you of the opening of this article, of Dudu's words: why should we compliment employees? they're only doing their jobs.

Want to increase production? Give your employees positive feedback and appreciation

So far in this article I moved back and forth between self-reflection on the subject of receiving compliments, and reflections on positive feedback and complimenting employees.

We all enjoy getting compliments and strive to receive them.

The power of appreciating is immense in every relationship, especially a professional one.

Not so long ago, a senior executive at a large organization asked my opinion – isn’t it time to move to a system of norms and premiums (a terrible system, by the way, which was outdated even when it was first conceived fifty years ago)?

A different manager called my recently to ask if it's right to give monetary rewards for success with the KPI's.

In both cases my answer was definitive: absolutely not.

We go to work to make a living, but we spend a considerable time out of our day at work. We all look to spend our time meaningfully during those hours, look for appreciation and recognition for being valuable people, thinking people. Not just a pair of hands moving a product from place to place.

Return for a moment to the example of Faiz , the machine operator, and Haim, his CEO:

Is All Feedback Positive?

Firstly, I'd like to say every respectfully given feedback is positive, creates motivation, and moves employees forward.

On a day production increases, it's right to evaluate success, give compliments, and inquire of the employee – how they achieved it.

On a day production decreases, we'll ask the employee for their opinion on the cause of it, and on how to improve.

A manger valuing an employee's opinion, showing it's important, creates motivation all on its own.

But that's not all, discussing the reasons for increase or decrease in production creates understanding and propels corrective actions. A change in the way of working is created, not just higher motivation.

How to Give Positive Feedback?

See a photograph posted to Facebook by Shalag Industries Inc. located in Kibbutz Shamir (a public company with a market value of close to 600 billion NIS): 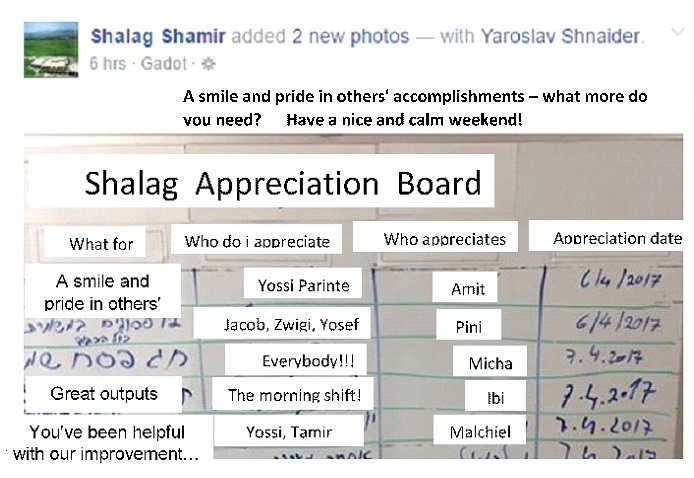 This appreciation board had a dramatic effect in creating motivation.

Appreciative messages in the organization's WhatsApp group. It is said that the late Pinki Zuarts, who was the head of the Binyamina-Givat Ada local council, would tour the streets of the council every morning at first light.

As he was touring, he would send "crowns", appreciative message of employees who performed admirably, in the council workers' WhatsApp group. In this way, Pinki Z"L led a change in attitude among council workers, enhancing their commitment to their place of work.

Acknowledging and appreciating employees is the way to build motivation, enhance their commitment to the organization.

The way to show appreciation and communicate to employees that they are valued is to ask or their opinions and listen to them, give positive feedback, in particular and especially to involve them in improvement teams.

I recommend you give positive feedback to your employees (and to those around you in general) at every opportunity, and make it an official and formalized action within the organization.