Dubi, a VP of Operations, gathered all the company's executives and showed them a short video he pulled from the factory's security cameras.

In it they could see how, at the end of the work day on Thursday, at three in the afternoon, the door to one of the departments was left open. Actually, it wasn’t a door, but a wide gate, made of two metal doors. Its width is about three meters, its height about four meters. A large gate leading to a department which is separate from the rest of the factory, adjacent to the yard.

At the end of their shift the employees left, and no manager went to check how the department was left before the weekend.

That day the weather was stormy. Rain got into the department, through the open gate, and soaked the last product shipment before it was sent to a client.

The strong wind pushed one of the gate's doors, banging it open and close. Even the warehouse manager, who was walking in the area, ignored the open gate, the penetrating rain, and the banging of the door.

After about two hours of the door being pushed and pulled by the wind, it broke and hung to the side. Employees and managers were still walking by – but no one took any notice.

On Sunday, the damage was "discovered".

Of course I wouldn’t expand on this example (and its continuation bellow) if it was an unusual one.

Note: I received permission to publish this event.

Why Should You Push Employees Out of Their Comfort-Zone?

In the room where Dubi showed the short video, stood a flip-chart with talking points from a discussion which took place there a few days previously.

Its title was "Why Should You Push Employees Out of Their Comfort-Zone?" 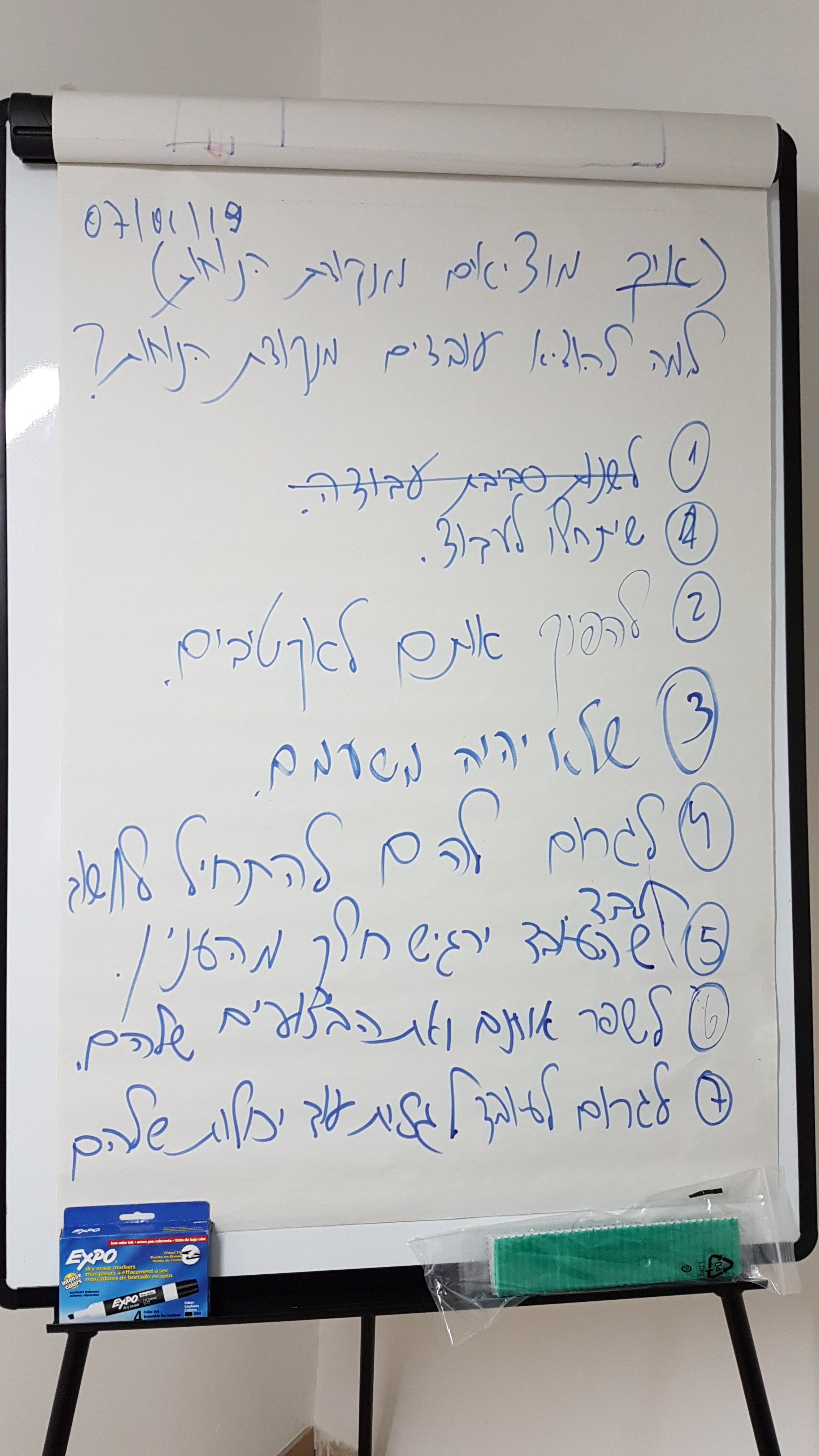 [A photo of the flip chart, with the points enumerated above]

It was a discussion Dubi had with shift and work managers – and for that he should be commended. But the question should be asked, "what does leaving the comfort-zone mean?

Why Should We Leave Our Comfort-Zones?

If we define a comfort-zone as what we're used to, a safe space, where we're not required to do anything new (as Dubi's team did) – then we'll only leave it if we have a special interest in doing so.

If we look at the example above, as captured by the security cameras, we'll discover no one in it thought even a centimeter to the side. Neither employees nor managers passing by (or who should have passed by to ensure the shift's work was ended properly, and the department was clean and secure).

In my opinion and based on my experience, everyone is willing to leave their comfort-zone, look at the big picture, and contribute more – if only we know how to get them invested in a goal.

And so the important question is – how do we get employees and managers invested in company goals?

Getting Employees and Managers Invested

If the employees and managers from the above example had been invested in company goals, they wouldn’t have been indifferent to the open gate.

And that's only the beginning. Invested employees will be absent from work less often, and wouldn't rush to leave and look for a new job, which they’ll also rush to leave. Invested employees will have an interest in the work, it will be important to them. They will give more of themselves to the company, while in turn finding meaning in their work. They will make a difference.

The conclusion is that it's not the employees who should leave their comfort-zones, but management – which needs to change the way it operates. It’s the responsibility of senior executives, first and foremost the CEO, to get employees and lower management invested in the company.

How to Get Employees Invested?

I wrote above that an invested employee will find meaning in their work, and that is the answer to the question. Before we delve into "how", I want to look at motivating factors. What motivates you? And in relation to the workplace, do you get up in the morning excited to go to work, and why? What factors make you happy to get to work, and satisfied when you leave?

I believe the main factor is knowing you matter to the workplace. That your opinion matters, that you're consulted, that you have responsibility, and that you're appreciated.

So as not to start redundant arguments and try to convince the inconvincible, I'll say only that if you have a high salary, but lack all I mentioned above, you'll not like your workplace and will leave it, or get up every morning unhappy to go to work. If you've been in the workplace long you'll be absent often and take many sick-days.

From looking at ourselves it's easy to deduce the simple tools to get employees invested.

You just need to believe the people around you are driven by the same factors you are.

So, what's required to get employees invested is to give them the opportunity to have a meaningful place in the company, listen to them, ask for their advice, give them responsibility, and give positive feedback at every opportunity.

Absolutely, no problem. Imagine the team working for Dubi, in the above example, had had responsibility. Let's assume Dubi had appointed one of the department's employees as team leader. And maybe every week a different employee would be responsible for the department – quality, quantity, record keeping, cleanliness, deliveries, shortages, other employees' needs – everything.

A to Z. I'm convinced at the end of the work day the department would have been clean. The gate locked. And Dubi would have received a daily log with quality checks, quantities, and unusual occurrences.

The same way, you should delegate. Listen to employees, consult, give them responsibilities.

The easiest way to do this is to have improvement teams led by employees who were trained for the task.

Employees Know Best What Goes On in the Workplace

In know many managers disagree with the above. I phrased it delicately; in reality it is much clearer. Let's assume you're looking into a complaint from a client. You have a meeting with technicians, engineers and managers, and… hand on heart, nothing happens. There is no improvement. It seems these people, who know how production should have gone, don’t know what actually happened. Were they on site? Working the line?

If you don’t accept my claim above, I'm willing to compromise and say each one of us sees things differently. An employee who's being working at a station for years has a unique point of view. Things only they see. Such an employee has important information to contribute.

Listen to employees, and you'll gain a lot, while also making them meaningful in the company. This will be the beginning of investment.

Back to Managers Who Need to Leave Their Comfort-Zones

A manager who, until now, has only met with certain people, a "cabinet", and suddenly starts delegating all the way down, having improvement teams, and listening to employees who were not heard before – undergoes a major change. A drastic change. And changes are scary.

For that reason, that manager will have to leave the comfort-zone. That's not an easy thing to do, to (using the language from the example above) leave your comfort-zone.

But in order to get your employees invested, you must do so.

I began this article with an example of employees and lower management having, so it seems, blinders on. Not caring. Disregarding company property and finances.

I then claimed that it's beneficial to create employee investment. To take the blinders off. And I showed how to do that.

The main tools are listening to them, valuing them and bringing them into discussions, and mainly through improvement teams.

These actions require the CEO to shift in thought and actions. To leave the comfort-zone. To act differently than previously.

I recommend you believe in your employees. Give them responsibilities and listen to them. Have improvement teams and create a considerable improvement in your profits.