This article is based on a TED talk by Knut Haanaes (a professor in the Business School at Copenhagen). His talk is titled Two Reasons Companies Fail – and How to Avoid Them. The reasons are: focusing only on the present and focusing only on innovation.

Focusing on the Present

Haanaes discusses one of the famous examples: Facit, the Swedish mechanical calculators manufacturer, which was at its peak in 1970 employing 14,000 workers, and then collapsed within six months when Japanese calculators hit the market.

The Facit example has already been mentioned on this blog, but Haanaes provided the new-to-me detail that ironically Facit engineers used to test their calculators using cheap Japanese ones, and still no "light bulb" went off.

They loved doing what they did and were so good at it, they didn't dedicate time to "look outside" at trends in the market.

Facit is a famous example, but there were others. A recent example from Israel comes from the world of cellular parking services. I heard it from Ro'ee Elbaz, Pango's CEO ever since it was a small startup of four employees.

In 2007 a tender for cellular paying services for parking was published by the center for local government. In those days, EasyPark dominated the market with a small yellow device you'd stick to the car window while parked. The company had 700,000 (!) subscribers. But they though cellular parking services had no future…

An internet search shows they launched a new device in 2011 and they seem to no longer exist.

Using and improving what we already have allows us to build on existing knowledge, to do things better, faster, or cheaper.

The risk is low in the short term and high in the long term.

Focusing Only on Innovation

At the other end of the spectrum are companies which focus only on innovation and constantly look to develop newer and better products.

Such companies, too, won't survive for long, because in the short term they won’t have sales and cash flow.

Innovation is the future, but we can never know when we'll have a new product or how well it'll sell.

Combining Innovation and Using What We Have

Children discover something new every day. As we get older, we have more knowledge and we discover less.

Companies are the same, as they get older they risk getting stuck with no innovation.

Looking at the short term we'll work to improve what we already have.

Haanaes says doing one thing (innovation or using what you have) well is difficult, doing both well – is an art.

In his view only 2% of companies manage to do both: simultaneously innovate and maintain what they already have.

But when a company succeeds at it the rewards are massive.

See the below scheme. 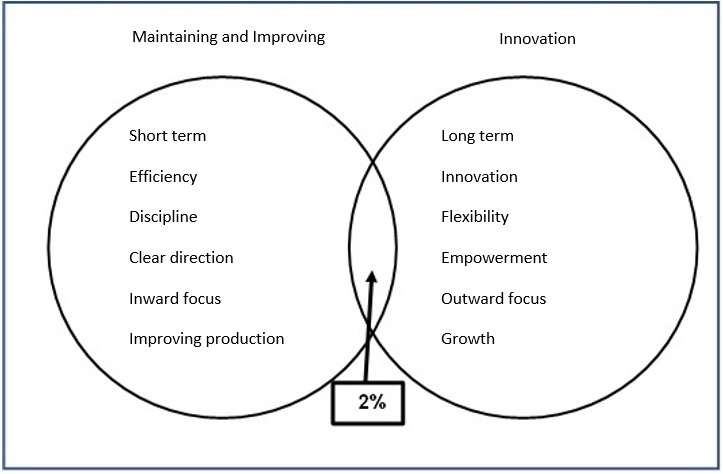 Haanaes discusses several examples of large companies who combine innovation with using what they already have:

Nestle with Nespresso, Lego with animated films, Toyota with hybrid cars, and Unilever with their emphasis on sustainability.

Why is it Difficult to Both Use What You Have and Innovate?

There are a few traps that keep us were we are. Let's look at two:

Without the patience necessary to achieve a product or service which has matured after a process of development, we quickly rush to the next new thing.

The Second Trap is Success

Facit fall into this trap and I'm sure you're also familiar with the "blindness" which strikes successful people.

When we know something is good, it's difficult to change it.

Haanaes quotes Bill Gates who said success is a poor teacher. It leads us to think we can't fail.

Haanaes suggests four lessons which are good personally and professionally:

Stay one step ahead of the crisis. Every company which can innovate has insurance for the future.

Look to the future in several set times. In the first year innovation will be only 30% of the company's value, but in the tenth it will already be 70%.

Look for challenges. None of us can, on our own, balance innovation with maintaining what we have. This requires teamwork. A good company (according to Haanaes) is one which is open to innovation. And a good board is one which enables building the infrastructure for it.

Be wary of success. Think of the generals who succeeded and gained fame. Remember they're only people.

The balance is rewarding but you must be careful.

Whether you tend toward innovation or toward preserving the existing – the beauty is in the balance.

Haanaes's talk emphasized a subject close to my heart, the blindness which comes with success. It's easy to fall into honey traps and stick with what brought us success. You need an inner strength in order to move on and look for new challenges and opportunities. When dealing with a company, or any group of people, we can combine teamwork into the process. To bring together people who think differently, who come from different backgrounds, who have different roles in the company.

Managers' forcefulness and pride can bring about future failures.