Why Everybody Wants to Be Appreciated but Are Slow to Appreciate

One day I shadowed Israel at his work. Israel is a shift manager at a large industrial factory. In this factory, the machines are large and complex and each is operated by one or two people. The operator has a considerable influence on the speed of production.

After Israel "kick started" the shift, he began going to each operator one by one, checking in with them, if the machine is working properly, if there's a lack of any materials. Tomer was the last operator Israel went to.

Tomer's machine was in another hall and Israel took his time. On our way there he told me Tomer was a very problematic operator.

Israel told me he found it very difficult to communicate with Tomer. Tomer was a senior employee who couldn’t be replaced operating his machine, and who took advantage of it. Working however he saw fit, undisciplined and with very low production.

Israel added that Tomer was unwilling to teach other employees to operate "his" machine. It was clear that Israel postponed meeting Tomer as much as he could that morning, and once we finally got to him they communicated poorly. I couldn't understand what Tomer was saying and I'm not sure Israel clearly understood him either.

We All Yearn for Compliments. Even Tomer

Over lunch Israel asked me how he should handle Tomer. How to get him invested in company goals and manage him successfully.

I suggested Israel compliment Tomer. Even if it's only for the most marginal detail, to give an enthusiastic compliment. It must be sincere, and for something real, not made up. We all, I told Israel, yearn for compliments, for appreciation, to be valued. In kindergarten we were happy to receive a gold star from the teacher. As adults that desire to be appreciated and valued hadn’t changed.

As kids we breathed and ate, and just like those needs hadn't changed, neither did our need to be appreciated and valued.

Even your CEO, I told Israel, likes to get compliments from his managers.

Are you personally not proud when you're complimented by your managers? I asked him.

Israel thought about what I said, and when lunch was over we went straight to Tomer. On the way Israel said he knows what compliment he'll give Tomer.

Appreciating Employees is a Motivator

When we arrived, Israel complimented Tomer on his professional knowledge which enabled him to identify a problem with the raw material. Israel said it's evident Tomer's a professional. Tomer, who until then was frowning, smiled from ear to ear, he was happy. He puffed up his chest and seemed to grow taller. Then Israel asked Tomer how he could help him.

Tomer thought a moment, called Israel over and showed him a few small improvements, assisting gadgets which will greatly help his work. Israel promised to take care of it. In the two and a half hours until the shift ended, Tomer's production was higher than in all the six hours before lunch.

Tomer Wasn't the Only One Israel Complimented that Day

Buoyed by his success, Israel decided to implement "the method" (that is, to find every way to compliment or appreciate an employee in order to motivate them) with Alex, another employee who had slow production that day.

This week, about a month and a half after the day I shadowed Israel, I met him and asked how things have been. Israel said Tomer is no longer part of his shift, but Alex has become one of his best workers and he continues to nurture him.

Do Managers Also Want to Be Complimented?

Vadim, Israel's manager, almost quit after the CEO scolded him. Vadim said the CEO only ever scolds but never says a good word, never shows appreciation. Almost daily I meet executives who complain their managers don't appreciate or compliment them.

"I only get criticism, no appreciation", many and varied executives tell me. I justify them and then ask if they in their turn give compliments. Do they give positive feedback to their employees? Here they fall silent, and I'm sorry to say often give an evasive answer.

Examples of Other Employee-Appreciation Methods

Each team-leader had an emoji for the weekly results, and separately for their accumulative score. The list was sent with a short personal note from me. Additionally, it would be published on the bulletin boards.
See an example of this kind of list (with names removed): 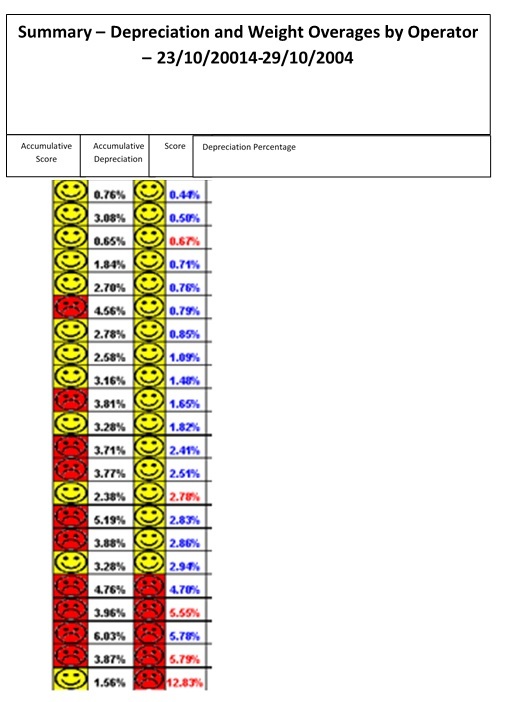 Results were amazing. Team-leaders worked hard to get a "smiley" denoting appreciation.

In another article I presented the idea of an appreciation board. On such a board managers can write appreciative massages to employees. It must be accompanied by a personal letter to the appreciated employee. See a photo posted on a Facebook page belonging to Shalag Industries Ltd. in Kibbutz Shamir (a public company worth about 460 million NIS in the stock market):

[image description: white-board with the title "Shalag Appreciation Board". Colums include date, name of person writing the appreciative massage, person being appreciated, reason for being appreciated.]

This appreciation board had a dramatic effect in creating motivation.

Appreciation through an organization's WhatsApp group

The late Pinki Zuaretz, who was the head of the Binyamina-Giva'at Ada local municipality, would go every day at first light for a tour of the municipality. During this tour he would send "crowns", appreciation of employees who did well, in the municipality's employees' WhatsApp group.

In this way he connected and motivated his employees through their commitment to the organization for which they worked.

This method, of using a WhatsApp group, is used by a few other companies I know.

Why Is It So Hard to Say a Good Word?

I presented above four examples of positive feedback, or employee-appreciation, which can be used to build motivation and created improved results. But despite good potential results, managers find it very difficult to give their employees positive feedback. To appreciate them. I still often hear "why should we appreciate them, they only did their job".

Positive feedback and an appreciative word are a powerful way to get employees invested in the company and to motivate them. It doesn’t cost money to say a good word, and its value far exceeds it.

In fact, it's generally difficult to appreciate people, even at home with our partners.

It's difficult for me to pin point exactly the origins of this difficulty. But I wish to build on the familiar saying: "Of everyone a man is jealous, except his son and disciple" (Sanhedrin 105). In other words, according to the Sages, people are jealous of everyone but their child or pupil.

I'd rather leave this an open question for you to think about.

Israel understood the principle and started using it. But he was the only one. That same company decided to focus on positive feedback and put up appreciation boards. But they remained empty…

Further in the article I discussed three more methods of showing appreciation or giving positive feedback. I recommend you make positive feedback a way of life. Not only at work. With a small effort you'll be able to get your employees invested in company goals, and have happier people around you at work and at home.