This month will see the publication of my first book will: Manage! Best Value Practices for Effective Management. To celebrate it, I would like to dedicate this weekly article to the role of the ideal manager.

In my book, I have assembled a set of tools that, based on my experience, I believe every CEO needs to know, and I have tried to present them in a brief, clear and consistent manner – one that will provide the reader with comprehensive and important knowledge to assist them in their role as manager. The first chapter is available for viewing in my English blog, and is entitled Twelve principles of effective management.

The book is available for purchase at Amazon or directly through me with a 25% discount.

The Image of the Ideal Manager

Together with Anat Milner-Cohen, I conducted a survey a year ago on the character traits required by a successful manager.

About five hundred internet users participated in the survey, and at the beginning of this year, we published the results and an analysis in a special article.

In this current article, I would like to address the image of the ideal manager (as seen from the survey results) in comparison with the traits that did not receive any votes in the survey, but which are only too common in reality.

The Ideal CEO according to Survey Participants

The survey for several weeks last year, and attracted more than 470 participants. In an analysis I published in my blog in February of this year, we addressed several categories: hired employees vs. freelancers, women vs. men, private sector vs. government sector and three different age groups.

In all of these sectors, the character trait that was voted as the trait most necessary to a successful manager was leadership. 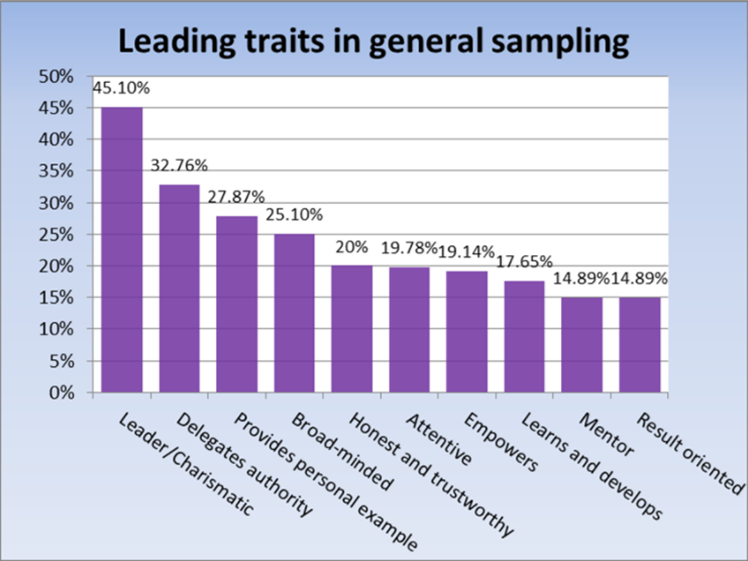 The manager who is a leader is the manager preferred by most of the survey participants. The character trait accorded second place was delegation of authority, ranked second by all sectors except for one age group, where it was given third place.

Despite the preference given to these two traits by survey participants, they are not that common among managers in reality.

So, is this a longing for someone that doesn't exist?

Before I discuss this more fully, let us examine the traits which did not receive any votes at all (each of the 470 participants selected 4 traits from a list of 46 suggestions. Over time, we changed the order in which the traits appeared in the list. In total there were 1,880 votes).

So does the survey represent attitudes that are not expressed in reality?

In my experience, I think an examination of managers who are successful over time reveals that the survey results represent not merely the choices of 470 anonymous internet surfers, but reality as well.

It is true a lot of managers who succeed in the short term might have the character traits that didn't receive any votes (reminder: the survey was on the traits required for a successful manager). However, my experience shows that, most of these successes were short term and, more often than not, were successes in public relations or in manipulating financial reports.

These successes usually collapse later on. I've met more than a few managers who succeeded in building wonderful companies, but who were neither aware of, nor prepared for, changes in the business environment and in the end, their successes waned.

History is full of examples of the successes of yesterday ultimately leading to the failure of tomorrow. One example is how the IDF's success in the Six-Day-War (1967) led to a blindness and perception that the next war would be like the previous one, leaving the army in the path of a series of surprises in the Yom Kippur War (which included not only the date of the war but also the military methods – for example, the Egyptians who attacked tanks with infantry armed with anti-tank weapons, and posed complex challenges to the IDF).

The rate of change in technology and the business environment is constantly increasing. The ability to develop, to learn and to change has become critical for every manager. One of the results of this technological progress is the fierce competition between companies across the world. Therefore, it is essential that every manager consolidate all the knowledge they have in their company and be alert and open to changes and new methods of action.

Returning to the survey, the traits selected by participants as being essential to a successful manager, and listed in order of preference, are:

I think you will agree with me that this choice aligns with what I stated above regarding the constant need to learn and adjust to changes in the business environment.

In the articles I have published in my blog over the last five years, I have addressed a variety of issues in the business domain, including many related to the challenges a manager faces

I have dedicated my first book to managers whose ears are always tuned to new ideas and methods of management – managers who are open to learning and to change.

I remember that when Nestle incorporated Osem (I managed Osem's major production factory at the time), they had demands that we found difficult to understand and internalize. Looking back, I don't understand how we worked otherwise until then.

Osem was and remains one of the most successful companies I know, always able to adjust itself to changes in the business environment and to constantly evolve.

Senior management at Nestle stated again and again that the reason they were purchasing Osem was that they had recognized an excellent company. But we had to adjust ourselves, and we needed a great deal of openness, to adopt methods brought in by Nestle, which contributed so much to Osem's subsequent streamlining and growth.

In this spirit of growth and development, I have detailed in my book the tools that I believe best serve every manager.

I invite you to purchase the book through Amazon or directly through me, and hope it will serve you well in your work.

Another look at the book

The book is based on some of the articles that have appeared in my blog over the last five years, and focuses on employee management, explaining how to improve business results by engaging and channeling employees towards company objectives.

From personal experience gained in meetings with numerous CEO's and on the basis of an examination of the issues that have been popular in the blog among thousands of readers, I have constructed a set of essential work tools to assist every CEO or manager in their work and in realizing company objectives. The major portion of this has been organized and published in the book.

The book consists of four parts:

The first part provides an overview (click here to link to the first chapter of the book).

The second part discusses the CEO's relationships with management and the Management Council, and how to lead the organization.

The third part engages in employee motivation and reward.

The fourth and last part provides a selection of essential tools to gauge performance, attain efficient management, perform root cause analysis and engage in problem-solving.

The book, published in English, is based on a selection of articles from my blog and offered in a 90-page volume, comprising 19 chapters.

Yorai Ronen, who directs my website and all of my Internet activities, was the first to conceive of the idea and propel it into existence.

Michael Sela edited and translated the book, sitting with me for endless hours over the past two years, to convert the selection of blog articles into a book.

Uri Bar was my graphic editor and Barbara Doron was in charge of grammatical editing.

Professor Peter Bamberger of Tel Aviv University's School of Management, wrote the following for the back cover of the book:

"Zeev Ronen has written a handy little guide to management that is filled with theory-based insights and recommendations, but written in a style that everyone – from a Fortune 500 CEO to the front-line supervisor in an SME – can understand. Ronen covers the full range of management topics from leadership, control and accountability to motivation, reward management, and quality improvement. Avoiding the usual academic jargon associated with such topics, he replaces it with hands-on advice driven home by stories from his background as an industrial engineer with years of experience as a CEO of both small, local enterprises and large, multinational organizations. A must-have guide for anyone recently appointed to a managerial position for the first time!"
Peter Bamberger, Ph.D.
Professor, Coller School of Management
Tel Aviv University