About six months ago, we published an in-depth survey here on the traits required for successful management. We wanted to explore how the general public perceives the image of a successful manager, as related to the character traits and talents a manager requires.

Close to 500 people participated in the survey (the following analysis refers to the first 470 participants and since then, more participants have been added).

From the diversity of the public that answered, one can assume that the survey results represent general trends characteristic of each population, and out of caution, we state the working assumption here.

We divided the respondents into four segments:

Respondents were provided with a selection of 46 character traits of our own choice (link to original survey with list of traits). Each respondent could select up to 4 traits from the list. The leading traits in the general sampling and in most segments, were:

As one will see later on, even when the preferred traits were similar, the weight granted to each trait was different. The differences in voting are fascinating and revealing.

One of the interesting facts revealed is that beginning with the first dozen respondents and up to today, there has been no change in preferences of leading traits, and the three leading traits have remained the top three throughout the voting period. Therefore, one might draw a reasonable conclusion regarding their strength of preference among the entire population of participants.

One of the interesting points from this sample analysis is the fact that the voters' preferred traits and the relevant ones for successful management – are soft traits. Another interesting conclusion – is the fact that most of these traits can be acquired for learning and empowerment.

My thanks to Maor Meltzer, who analyzed the voting and constructed the graphs below.

In general, one can see that the leading trait by far in the sample is "leader/charismatic". Approximately 45% of participants marked this trait as important for good management. It is also the leading trait in each segment.

It was noted that for all participants, a good manager is one who can lead employees in the completion of their tasks, while providing a personal example. In addition, the ideal manager is not centralized and places trust in his employees by delegating authority.

Other traits marked as being important for a significant number of respondents are "broadminded, sees the broad picture", "honest and trustworthy", "learns and develops", "empowers", "attentive" and "mentor". From these traits, one can see that a successful manager is one whom employees can trust, and who can enjoy employee trust themselves.

The following is a graph representing the ten leading traits in a general sample. An analysis of the results will be conducted during the analysis of differences among the various segments. 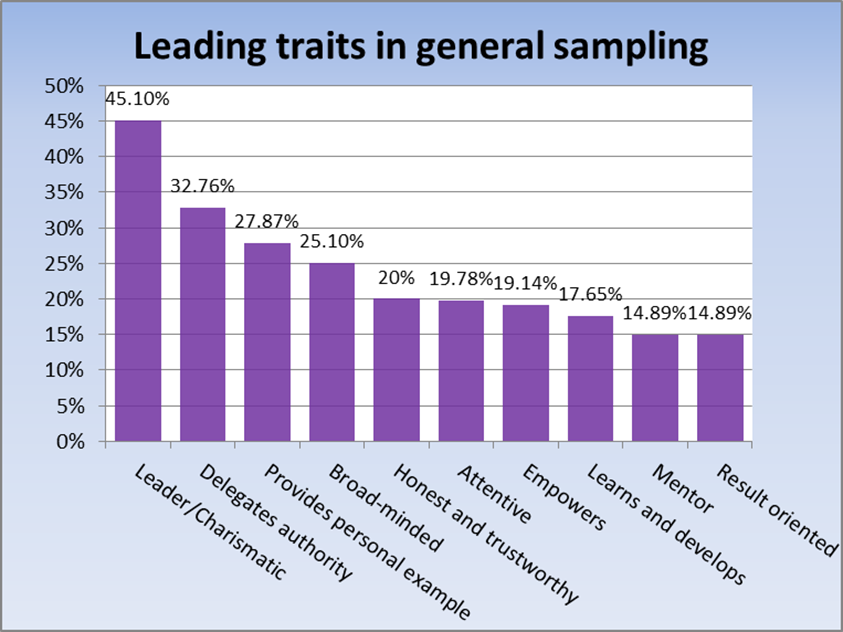 Our research revealed a number of differences between freelancers and salaried employees.

Perhaps this stems from freelancers hiring managers and wanting them to find solutions they havn't thought of themselves. For freelancers, the ability of the manager to be attentive was found to be a little more important than among salaried employees, as was the manager's ability to empower employees.

The next two graphs represent the ten leading traits for freelancers and salaried employees respectively. 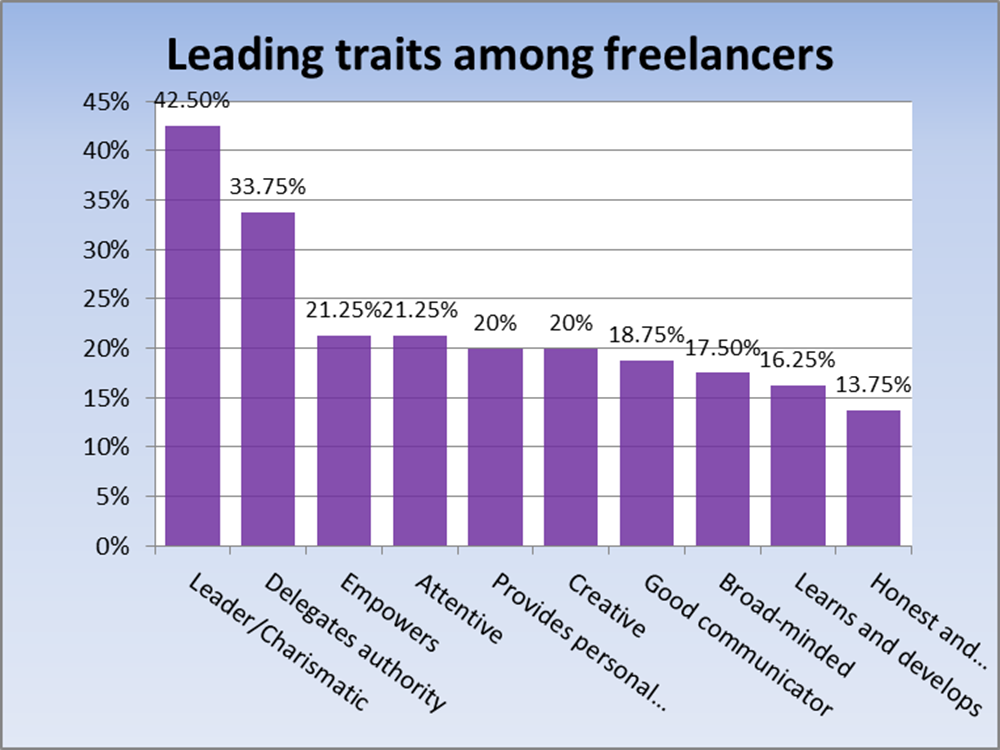 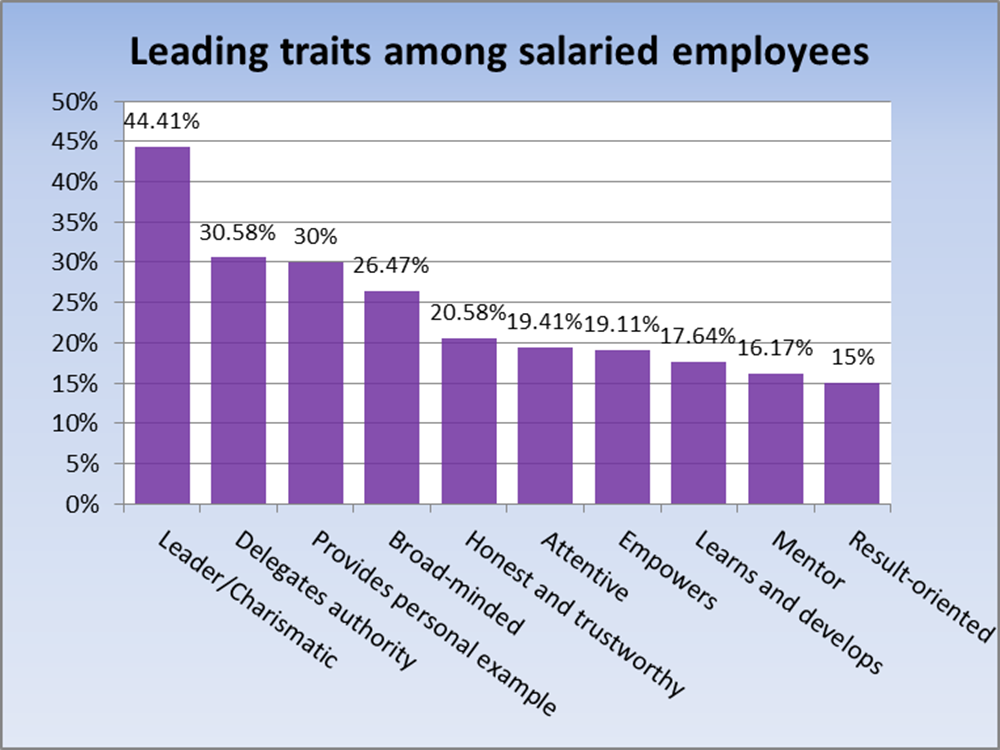 The four leading traits among men and women were identical: "leader/charismatic", "delegates responsibility", "provides a personal example" and "broadminded".

Among men, the demand for a manager to be a leader was higher, whereas the women expressed a broader allocation of preferences. Men place honesty and trustworthiness as a stronger preference in their manager, and they also demand that their manager be result-oriented and a mentor.

In contrast, women prefer a slightly different managerial model – one of management that shares more in decision-making ("engages in shared management") and concern for employees in the work environment. The next two graphs represent the ten leading traits among women and men, respectively. 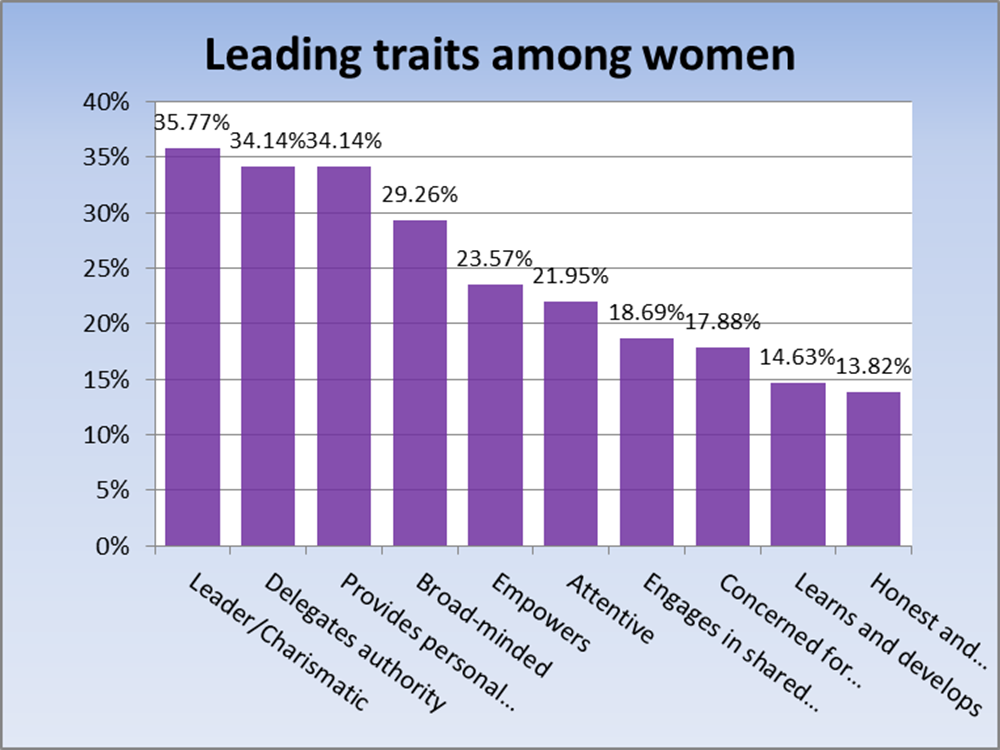 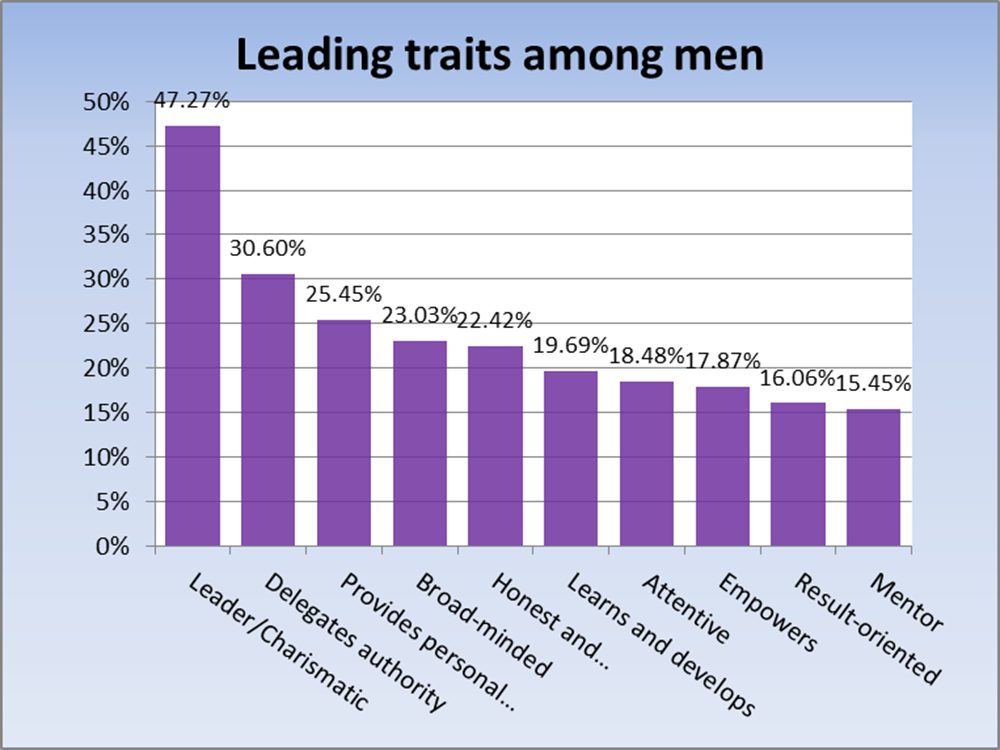 In a comparison of different sectors, we see differences primarily in the types of traits in demand. 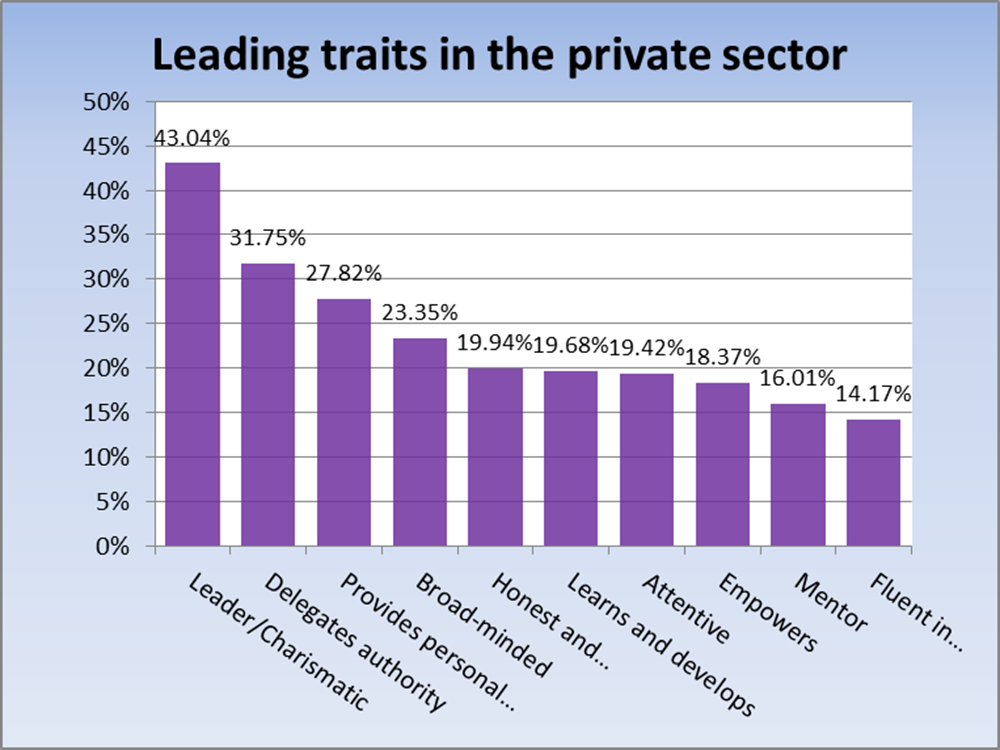 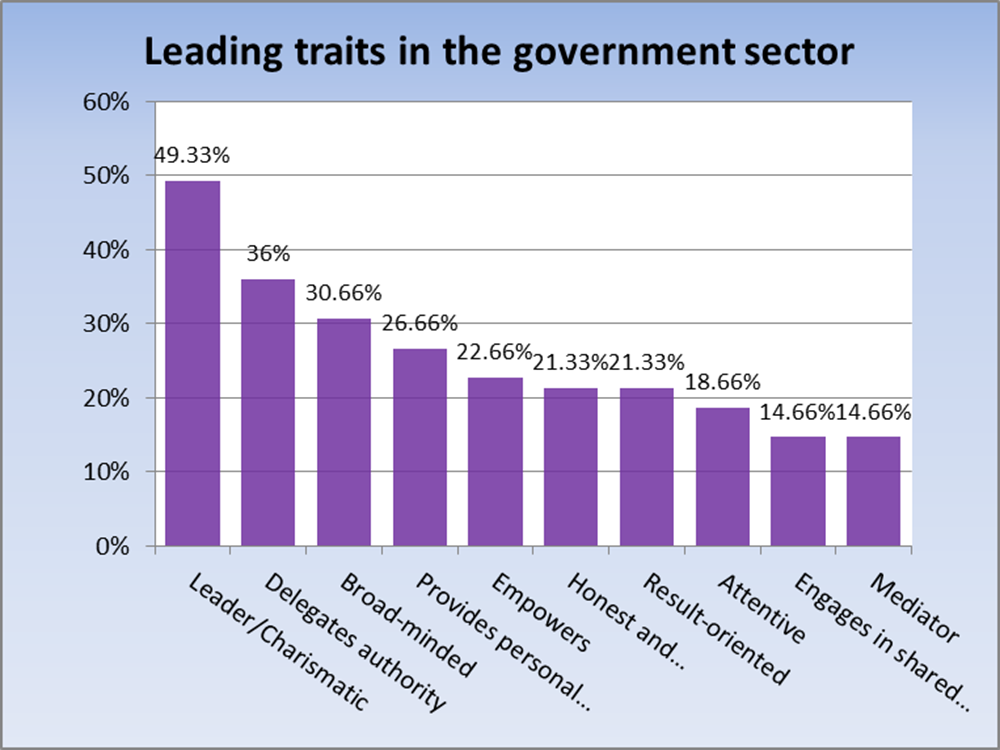 Here we can see that in the current sampling, the importance of the leadership trait increases with age.

Participants in the "over 50" age group ranked "leadership" at the highest level – more than 50% of participants ranked this trait as being important.

In addition, the two younger age groups more strongly value concern for employees than the older age group, for which this trait did not receive a high ranking. The next three graphs represent the leading traits in each age sector, from younger to older. 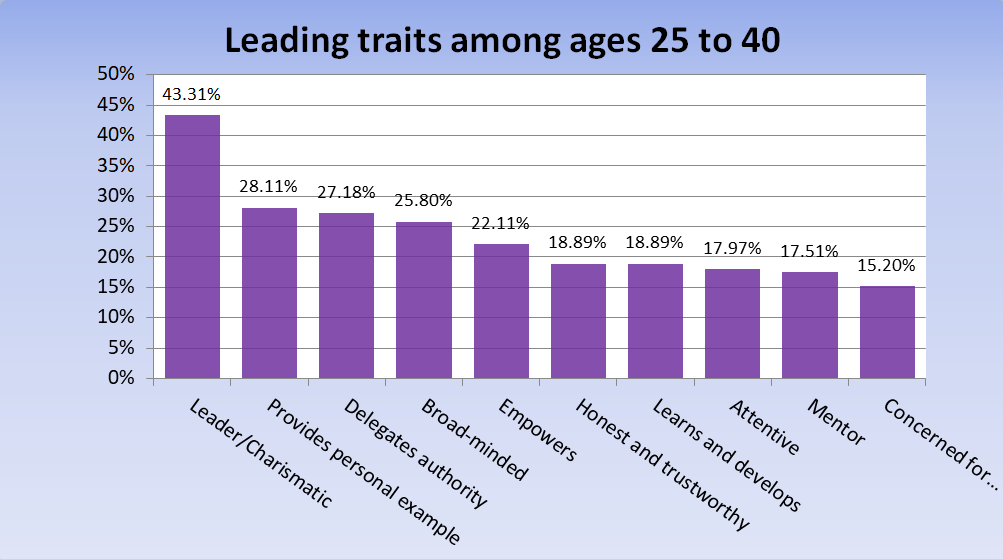 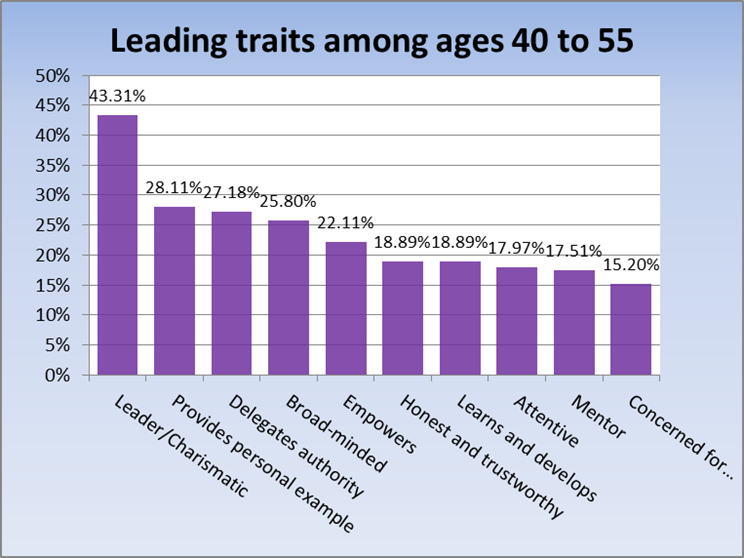 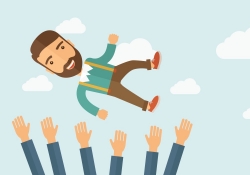 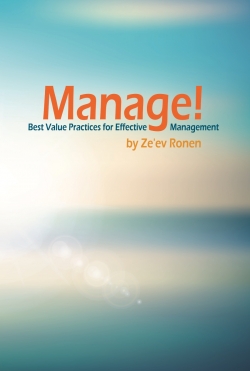 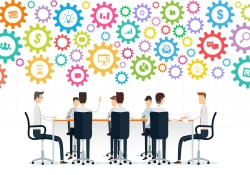